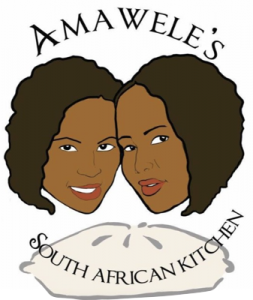 The success of the establishment prompted co-founders Pamela and Wendy Drew to change the name and business model. In 2015, Amawele’s South African Cuisine INC. was born. This signalled the start of a transition from food joint and corporate catering to online subscription food service.

After six years of operations in a brick and mortar, we saw an opportunity to transition our operational focus. We increased our corporate catering services and online subscription food delivery, including our first scaled product, Amawele’s Rooibos Ice Tea (now rebranded to Rooibos Refresher), all of which are available on amaweles.com

Growing up as identical twins in Durban, South Africa, our peers had a difficult time telling us apart, hence the nickname Amaweles.

Amaweles is a Zulu (Ubantu) word meaning ‘The Twins’. Growing up as identical twins in Durban, South Africa, our peers had a difficult time telling us apart, hence the nickname Amawele’s. We always had dreams of exploring the World through food and travel and after achieving success in the South African finance world, our dreams of travel fast became a reality.

The United States was the first country we decided to visit and a work abroad program that was supposed to keep us in the United States for only two years, quickly became our future. Our journey to becoming entrepreneurs in San Francisco, was long, fulfilling and unexpected. We travelled and worked as childcare providers and our passion for cooking South African cuisine ultimately inspired us to start our own business, a South African food joint in San Francisco; Amawele’s South African Kitchen.

The multicultural cuisine of South Africa boasts a fusion of different spices from around the world, as adopted by the indigenous people of Southern Africa.

Much like the ‘Rainbow Nation’, Amawele’s South African cuisine can be described as a melting pot of influences from English, Indian, Dutch, Malaysian and Native African cookery.

The global ethnic foods market is projected to grow at a CAGR of 11.8% during the forecast period.

Our vision is to scale our existing offerings and focus on three areas where we see extraordinary growth potential.

Traditional South African cuisine, available as subscription based meal plans, as in our current online store.

The global ethnic foods market is projected to grow at a CAGR of 11.8% during the forecast period.

Ethnic food manufacturers are focusing on the convenience factor, quality of food, cuisine variants and packaging formats of the products. Therefore, with the increasing consumption of nutritious food and rising capital investment in producing healthy, ethnic-based food, the market studied is expected to gain traction over the forecast period. Additionally, the market studied continues to diversify, as consumers continue to experiment with new global cuisines. Some of the niche ethnic food categories include the African and Indonesian cuisines that have been growing over the recent years.

Enter Amawele’s South African Cuisine INC. Our cuisine is healthy and our flavours are globally infused, therefore putting us in the ethnic niche healthy food category. Our food is relatable through all cultures – there’s something for everyone. With an array of products that we plan on manufacturing, we have the potential of not only selling in the American Market but also the global market with a focus on Commonwealth Countries.

South African Cuisine does not have any major representation in the USA or global market.

Our online platform, amaweles.com will be used to sell our food products through single and bulk purchases and subscription based meal plans. After an aggressive scaling strategy, our projections are as follows:

Growth would open the opportunity to move into major retail food players such as Costco, TraderJoes, Walgreens, Wholefoods, etc.

We plan to increase scaling at the same rate, doubling subscriptions to 200k on both subscription meals and beverage sales.

We are seeking for between $15 and $20 million to begin aggressive scaling of our products and operation.

In 5 – 10 years Amawele’s South African Cuisine INC. has the potential of being a multi million Dollar Food Company and will have high selling potential.

Executive Assistant to CEO and CFO